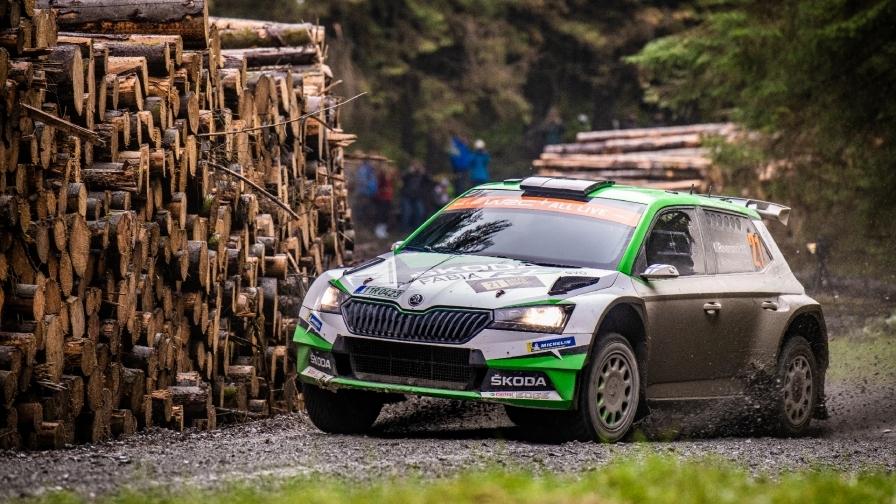 Having lost the category lead to Skoda Fabia team-mate Jan Kopecký late on Friday due to a puncture, the teenage Finn regained top spot in Saturday’s opening speed test.

Rovanperä’s advantage grew as his Czech colleague firstly punctured and then rolled his car, and he ended the day with a 4min 38.7sec lead. Victory tomorrow would secure the crown.

Kopecký survived his dramas to return to the Llandudno overnight halt in second. Hayden Paddon retired his Ford Fiesta from third following the penultimate speed test after suffering two punctures with only one spare wheel onboard.

Former world champion Petter Solberg turned back the clock to lead WRC 2 after an enthralling duel with Pierre-Louis Loubet.

The Norwegian, outright winner in Britain on four occasions and competing in his final rally after a glittering career, traded the lead with the Frenchman three times before ending with a 12.5sec advantage in his Volkswagen Polo R5.

Loubet’s consolation is that second place at tomorrow afternoon’s finish would propel the Fabia driver into the championship lead with two rounds remaining.

Adrien Fourmaux was a distant third in his Fiesta, more than 2min 30sec adrift of fellow countryman Loubet. Marco Bulacia was fourth in a Fabia, only a 20sec penalty for arriving late at a control keeping him out of third. Fabio Andolfi eased ahead of Alberto Heller in fifth and sixth.

Championship leader Kajetan Kajetanowicz retired his Polo for the second time in two days, a gearbox problem sidelining the Pole.

Teenager Oliver Solberg made a sensational return after an early exit yesterday. Driving his first WRC event, Petter’s son was fastest through the opening two stages before his Polo stopped early in the third test with technical problems.