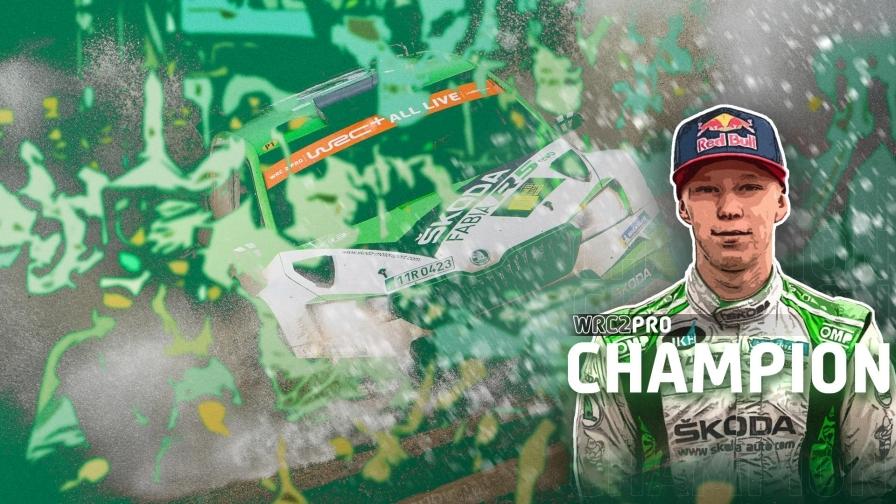 KALLE ROVANPERÄ SECURED THE WRC 2 PRO WORLD TITLE BY CLAIMING HIS FIFTH VICTORY OF THE SEASON AT WALES RALLY GB ON SUNDAY AFTERNOON.

Rovanperä led the four-day event initially before a puncture allowed his team-mate into top spot. A similar problem for Kopecký delayed him on Saturday before the Czech rolled to leave Rovanperä in the clear.

Third went to Gus Greensmith, the Briton finishing more than 40 minutes adrift after wrecking his Ford Fiesta’s rear right suspension when he swiped a bank on Saturday morning.

Emotions ran high as fan favourite Petter Solberg won WRC 2 in his farewell rally. The 2003 world champion, four times a Rally GB winner, steered his Volkswagen Polo onto the podium in Llandudno with an 18.8sec advantage over Pierre-Louis Loubet’s Fabia.

The pair fought tooth and nail for top spot on Saturday before Solberg edged clear as Loubet was content to settle for the runners-up spot, which promoted him into the championship lead with two rounds remaining.

Solberg (below) presented his former team managers David Richards (Subaru) and Malcolm Wilson (Ford) with commemorative crash helmets on the podium as he ended his rally driving career.

Eighteen-year-old Oliver Solberg, who only passed his driving test the week before the rally, had an eventful weekend. After retiring on both Friday and Saturday, he returned to the fray for a third time on Sunday and won the opening two tests before rolling into retirement.