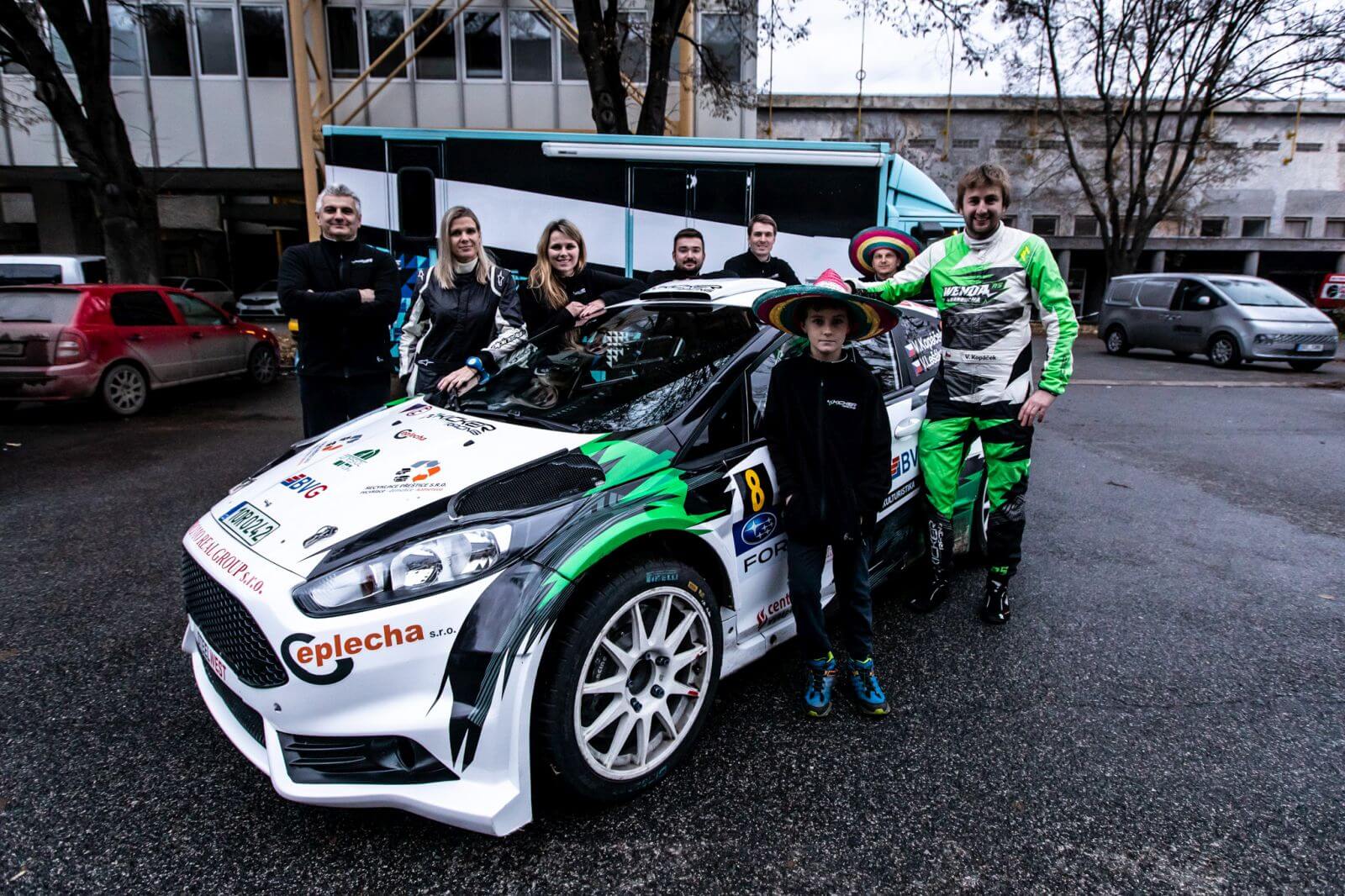 The 2022 season was a turning point for Kicker Racing. The team took to the Czech tracks with its own Ford Fiesta R5, behind the wheel of which pilot Václav Kopáček scored his first victory in the prestigious P2+ Cup during the Příbram Rally. Moreover, it was not the only team success of the past year…

For five years in a row, Václav Kopáček has been competing in motor racing events on the Arabian Peninsula, but in 2022 it was in a slightly unusual role. Firstly, at the end of January, he navigated Petr Kacirek at the Oman Rally, which was part of the popular Middle East Rally Championship (MERC). This resulted in a silver medal for the Czech duo, just behind the famous Nasser Al-Attiyah, who had also triumphed at the Dakar two weeks earlier. In February, Kopacek also took part in one of the events of the United Arab Emirates Rallycross Championship, from which he even took the overall victory.

And how different is rallycross there from what we are used to from Central Europe?

“Basically, it’s a completely different sport. In the Emirates, the word is used to describe a competition in which individual competitors are timed over several passes on the same short track, which is run in both directions. So it’s more of a preparation for a real rally,” explains Kopacek.

Vaclav Kopacek didn’t get behind the wheel in a real rally until April:

“And anyway, it was actually pretty early, because we spent the whole winter trying to get our Fiesta back to its original look before the fall accident that happened to one of the competitors we lent it to. We had a hard time getting all the parts, especially the new body from M-Sport, which arrived very late. And so, immediately after disassembling the car, Petr Pika and I got into the practice car before the Šumava-Klatovy rally and without any “race car” tests we went for familiarization runs. It was frustrating, we put a lot of diligence and patience into putting the (de-facto new) car together, but the confidence was lacking. Fortunately, the effort paid off, and the race car performed more or less correctly on the shakedown, only slightly lacking in engine power, which accelerated poorly from low revs.

The reason for this shortcoming we found out after the competition, the fault was a cracked turbine diaphragm, but it was still possible to race with it. We stayed in the top ten for most of Saturday’s stage, which was about the order we imagined. Unfortunately, three kilometers before the finish of the last stage on Saturday, we hit something in the grass with both of our left wheels, and one of them quickly came off. To avoid damaging the car even more, we replaced the wheel. On the second day we moved up a notch, had fun driving and, because the newly assembled car held up well, so to speak, we finished in a solid twelfth place.”

Kicker Racing prepared another start for another West Bohemian event, the one-day Rally Pilsen, part of the Rallysprint series and the P2+ Cup.

Ten R5/Rally2 cars and three “supercars” gathered at the start in June, so the competition was certainly not weak. Kopacek and Pica were still in the medal position from the first stage, but when they started to approach the silver position, a small technical problem with the servo control arose and with it a loss of time.

Nevertheless, the Fiesta R5 crew was able to wipe it out and in a dramatic finish, they were back in third place behind matadors Pech and Steif, just two seconds ahead of two-time P2+ series winner Martin Vlcek.

Kopacek and Pica have scheduled their next start for July’s Rally Przybram, where they will eventually achieve their biggest success of the 2022 season. The competition was similar to the one in Pilsen, but the clear favorite this time was Dohnal of the home team in the latest specification WRC car.

However, in the final results of the event, right behind him was the Kicker Racing team, which earned a valuable victory in the P2+ Cup, in which the supermodern Fiesta Dohnal is not classified. Kopacek and Pica dominated the P2+ classification from the second stage until the end, this time behind them was the experienced Vojtech Steif, whom the Western Czechs avenged their defeat in Pilsen.

“Already in the June competition we had a good run, right after Šumava we managed to fix the engine problem we encountered in Klatovy. However, after a rail failure and a short servo disconnection we lost time here as well, so we were very happy to win the bronze at the finish. In Pribram we were in suspense throughout the whole competition. Unlike Honza Sýkora and some other competitors, we hit the mark with the choice of tires, the more agile nature of the tracks suited us, we just did everything there. Of course, we couldn’t keep up with Honza Sýkora’s WRC, we have 2016 equipment, and our R5/Rally2 category development has come a long way since then. All the more we were happy with the result at the finish line in Pribram,” smiles Vaclav Kopacek, recalling his summer adventure.

Kicker Racing’s successful series then continued with a win at the Podbrodsk Legends Meet, where Kopaczek and his co-driver Kindle struggled (except for opponents with weaker machinery), especially in the “derby” against the Sýkora – Matuška pair.

Just a few days later, Petr Pica returned to the Ford navigator’s seat, and the combined duo headed to one of their favorite events, the popular Pacejov.

For the third year in a row, the Czech Rally Championship was held over two days in the southwestern part of the Czech Republic. So the competition was very strong: fifteen R5/Rally2 cars and two WRC cars with multichampions Pech and Kopecký at the wheel.

The white and green Ford Fiesta R5 started in fifth place, which Kopecky and Pica held throughout the entire first round. Unfortunately, the successful streak came to an end in Sunday’s second morning test.

“On one horizon I held the gas too long and there wasn’t enough time to brake, the tires didn’t fully support us at that point and we slid a little bit into the ditch, which unfortunately was very deep. The car didn’t even have any mirror damage, but we couldn’t get out on our own, after a long struggle the manipulators finally helped us out of the ditch and we made it to the finish line with a seven-minute loss. We completed another stage where we also had a high-speed crash right before the finish line. This time, however, we were lucky and made it to the finish line and service area with the car intact. There, after a long discussion within the team, we decided to abandon the competition and avoid any consideration of accepting unauthorized foreign aid. A good result was lost anyway, and with a limited budget we saved at least some equipment for the next races,” says Vaclav Kopacek about his home competition.

He didn’t score many points in the overall Czech 2022 Championship, but things were much better in the year-long P2+ Cup, where two very successful summer performances lifted him to fifth place in the overall standings, tying him in points with young talent Erik Kais.

At the end of the season, the thirty-five-year-old from the West also drove the Fiesta in two fall free events, which were the Meeting of Champions at the Sosnova Raceway and the Prague Rally Sprint. Neither of them were focused on results, more important to them was socializing with partners and teammates, and entertaining spectators with wide skids. Nevertheless, the result was a place in the top ten in Prague, and Vlasta Leshakova took a co-driver’s place in the race.

The Ford Fiesta R5 has also been spotted at two Moravian Sprint Rallies with Martin Šikl – Petr Vilímek crew, which may even have been a harbinger of sorts for next season.

“Renting our car is one option for next season, we’ll see who would be interested in going,” said Barbora Rendlova,

“It’s still unclear what the finances are for the Venda races, the ideal option would of course be to complete a comprehensive program in one of the domestic championship series. We do not rule out further starts in the Emirates, but even there the situation with motorsport is not completely clear. Of course we would like to drive mostly in the competitions, which take place in close proximity to our home. Now I’m referring to our team, because as far as my racing is concerned, at the moment I consider it more of a closed chapter, because even outside the racing seat there are still many tasks and challenges for me. On behalf of the Kicker Racing team I would like to say a big thank you to all our teammates who support us, as well as our amazing fans. Without all of them we wouldn’t have been able to do this and wouldn’t have had so much fun – we really appreciate their support and wish everyone a successful 2023!” – Barbora Rendlova summed up the year